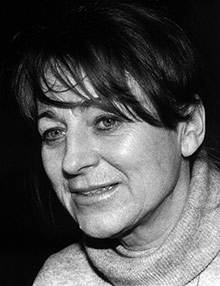 Daughter of the philosopher and rector of Palacký University in Olomouc, Josef L. Fischer. After studying Czech and Polish, she worked in the literary editorial office of Czechoslovak Radio, and after leaving for exile in 1968 she lived in Basel, where she changed many jobs (among other things, she was a private language teacher, wardrobe or door-to-door pot saleswoman). From 1972 to 1977 she studied German and history at the University of Basel, later moving to Munich, where she taught German in high school and worked as an editor at Radio Free Europe, for which she wrote essays, reviews, and prepared cultural programs. She published a total of eight highly prized collections of poetry. She lived in Prague since 1994.
Fischer published many poetry collections. Meander has published a total of four of her children's books: Co vyprávěla Dlouhá chvíle (2005), O Dorotce a psovi Ukšukovi (2007), Jak zvířátka uzdravila smutný dům (2011) and O kočce Mňauce, pejsce Bibině a maminčině lyžařské botě (2011).