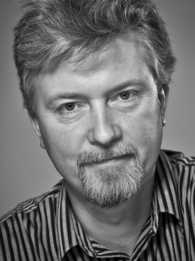 Trailer ke knize O smutné továrně
ENG
He was born in the Duchy of Teschen in 1966. In 1984 he graduated from the easternmost Czech grammar school - in Třinec. He studied cultural theory at the Faculty of Philosophy of Palacký University in Olomouc and directing at The Academy of Performing Arts in Prague, Theater Faculty.
He got his first engagement in the Prague Drama Club in 1991.
In the years 1992–2008, he was the main director of drama at the National Theater of Moravia-Silesia in Ostrava. Then he worked for two seasons at the Švand Theater and now as a freelancer. More than sixty theater directions here and there.
Active cafe lounger. Passive larch wrapper. Author of the Šumná města project, screenwriter, and director of the follow-up project Šumné stopy. An external pedagogue of the Faculty of Arts of the University of Ostrava.
He publishes random verses, imaginary prose, and systematically inconsistent feuilletons in the Modrý květ, Literární noviny, Tvar, etc.
Stránka 1 z 1 - 1 položek celkem